The S-Band Antenna S2023 has been designed for use on board of small satellites. The pattern shape has been optimized particularly for low earth orbit (LEO) missions with NADIR orientation.

The antenna is broadband and operates at both the standard S-Band frequencies for satellite missions, i.e. downlink at 2200 to 2290 MHz and uplink at 2025 to 2110 MHz.

The antenna design is compact, solid and very rugged.

To achieve spherical coverage the S2023 could be used in pairs with opposite placement at the satellite body. 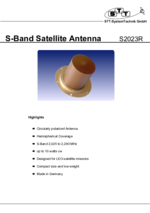